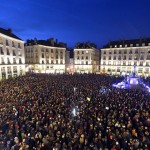 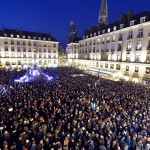 This is war.  Prepare yourselves from Potneck to Paris.

Free Speech was attacked yesterday by a violent middle eastern religion that has no tolerance for anyone who disagrees with it.

Is that true?  Or, is this another false flag attack to further divide the world into perpetual war and continuous fighting for ideology?

Is it Muslims against the rest of us?

This is becoming the perception more and more today.  It has been projected in the mass media as such and this religion is secretly believed by many to be of a suspicious behavior. Much of this belief stems from the beheading occurrences that seem to follow it.

Suspicion was the moderate perception of the religion even before yesterday’s attack. Most Americans, and most Potneckers, still want to believe in the acceptance of Islam as a peaceful religion.  The mass media was, and is, largely complicit in the selling of the “Nation of Peace” ideology and, as tolerant Americans, we easily bought it.

Everyone gets a chance in America.

But are these attacks a sign of things to come?  Michel Houellebecq’s book, “Submission” is a cutting edge, mid 21st century prediction of a futuristic, apocalyptic, and heavily Muslim influenced France.  The France of today does allow for this scenario to occur.

As Potneckers we must ask ourselves, is this a natural occurrence that will be held within the borders of Northern Paris?  Of, even France?  Or, can we expect this to happen in London in 20-30 years?  In Michigan in 40-50 years?  In Potneck in 100 years?

Is this just a passing religious murder phase that is centrally located in only one major area of concern in the world?  Is this now a global concern?  Is it war?  Potneckers are some of the smartest people I know.  What do you, Potneckers, think?

Is a purge coming?  And, if a purge is coming, it remains to be seen, doesn’t it, just who is to be purged?  It also remains to be seen whether it takes 1 year to finish the purge or 100 years.  The time table will be indicative of who the victor will be.

Can there be a different solution?  Can a “peace” be found where the Nation of Islam and Muslims can accept being intellectually challenged by their fellow humans on the basis of religion?  This is what all other religious beliefs are expected to do.

Can Muslims, if, indeed, it is the Muslim ideology that is perpetuating these crimes, be expected to be tolerant of all attacks against them whether they be ideological, intellectual, or satirical?  There is no middle ground in the protection of free speech.

Is this another 9/11, Sandy Hoax false flag?  The fact that we don’t know, for sure, is very upsetting.

This is where we are.

For whatever reason, Parisians are being purged right now.

Who is at fault and what shall we do? 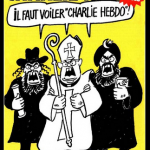 Bubble reads, “Must veil Charlie Hebdo!”  PNN understands the picture to be depictions of The Pope, The Prophet Muhammad, and some representation of a Jewish person.  Charlie Hebdo is described as a weekly French satirical publication, founded in 1969, that satires everything in France from Charles de Gaulle and politics to religion of all types.  Charlie Hebdo’s editor and graphic artist director were viciously assassinated yesterday along with 10 others, including two unarmed policemen. 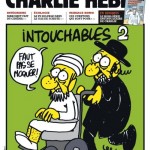 This is a spoof of the film The Untouchables 2.  The bubble reads, “Must Not Mock” and is attributed to both a cartoon depicted as the Prophet Muhammad and the common Charlie Hebdo rendition of a Jewish person.  These Jewish representations depicted by Charlie Hebdo seem to be a reflection of orthodox Jewish beliefs.  Potneck News encourages all Potneckers to respond with their thoughts on these cartoons.  Are they “okay” or are they “off limits”? 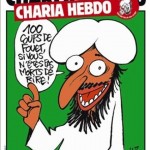 This Prophet Muhammad says, “100 lashes if you are not dying of laughter.”

This is what got 12 people killed in France yesterday. Seems innocent, enough, to PNN.

Stephane Charbonnier, Editor of Charlie Hebdo gave his life for the rights of free speech.  He is famous for saying in 2012, “I would rather die standing than live on my knees.”

The following is the, “Mother of all Prophet Muhammad cartoons”. 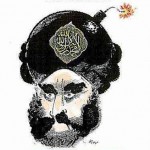 Reprinting or posting this cartoon has gotten people killed in the past.

Is this free speech or is it poor taste?

Does it really matter?

What kind of insecurity fears this freedom?

PNN doesn’t fear this.  Do you?

At last report, no one will kill or threaten to kill you for reproducing the pictures below. (Click on the images for clarity.) 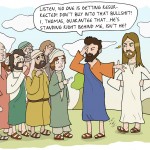 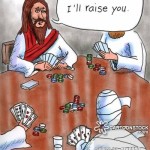 Are we at a crossroads?  Will this war come to Potneck?